Learn about the legendary coach that started it all and the extraordinary recipents that have dedicated themselves to excellence on and off the field.

The annual awards ceremony is held at the Dallas Country Club.

John Mark Stallings touched many lives and showed the world how individuals with Down syndrome could contribute to the world.

Named in honor of Gene Stallings, this unique award is presented annually to an exceptional NCAA Division I college head football coach in recognition of humanitarian contributions in addition to achievements on the field.

Off the field, he and his wife, Ruth Ann had five children. In 1962 their son, John Mark “Johnny” was born with Down syndrome and a serious heart defect. Medical professionals predicted Johnny wouldn't live to see his first birthday and urged the Stallings to institutionalize him – conventional wisdom at the time. Gene and Ruth Ann never considered that option. Johnny won the hearts and adoration of everyone who took the time to know him, and, proving the doctors wrong by leading an active life, he became a vital part of his family, his community, and his father's career.

When Coach Stallings returned to The University of Alabama as head coach, The Stallings family immediately became strong advocates for the Rise Program – a program initiated on the Tuscaloosa campus in 1974 designed to serve young children with physical disabilities.

In large part due to the notoriety of the Alabama football team’s 1992 national championship and involvement of coach Stallings, the university’s capital campaign, which included a new facility for the Rise Program, met its fundraising goals. The Rise Program was able to expand and become the state-of-the-art, accredited program that serves as a model for the development of similar programs across the country, including the Rise School of Dallas.

Proceeds are donated to The Ashford Rise School of Dallas. The mission of the Rise School is to provide the highest quality education and therapy services to preschool children with and without developmental disabilities.

IN HONOR OF JOHNNY STALLINGS

The Stallings Award is now in it's 12th year of honoring a college head football coach for their contributions in their community and achievements on the field.

We invite you to be involved this year as we continue the tradition of brotherhood and family throughout the college football community. 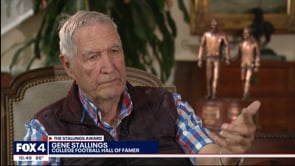